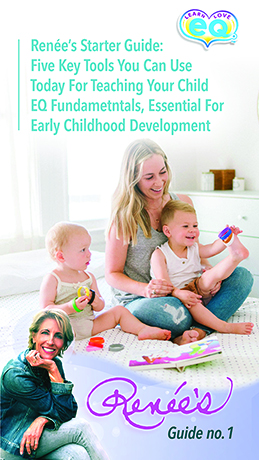 Sign-up to have your free emotional intelligence parenting guide sent to your inbox.

The Incredible Resiliency of Mothers

What is Emotion Vocabulary?

Martin Seligman and the Power of Positive Outlook

The 5 Components of Emotional Intelligence Parenting

A Message For New Visitors

Poppie or Poppy? A Message From Renée

Inside Out: Making Emotional Intelligence Fun For Kids

Being a Whole Modern Parent

The Whole Modern Parent Podcast: Why Resiliency, Self Empathy and Not Giving Up are Foundations of High EI/EQ

Headspace Guide to Meditation: For Beginners and Experts Alike

Albert and Christine Yee had a lot of questions about what parenting should look like when they had their first child, Aaron. A stack of parenting books led them down a rabbit hole of conflicting information. They started to question their natural parenting tendencies. Were they being too strict? Too lenient? Were they not challenging their child enough? Were they pushing them too hard? Were they showing their child enough affection? Or were they coddling their child too much? They seemed to have a new answer with every book they read, until Albert picked up a book he thought might make a difference.

John Gottman is well known in the world of EI. His book, Raising an Emotionally Intelligent Child, included a foreword from Daniel Goleman. In his book, he identifies 4 different types of parents and the effects of those parenting styles on their children. Those styles are:

—A parent who thinks emotions are unimportant and ignores them. They want negative emotions to disappear quickly and will minimize or downplay whatever lead to the outburst.

—The effect of this parenting style, Gottman found, was that their children believed their feelings were wrong or that there was something wrong with them for feeling intense emotions. This lead to a greater difficulty with emotional regulation later in life.

—This parenting style was very similar to the Dismissing Parent, except in a more negative, judgmental manner. There is a heavy emphasis on conformity and a belief that negative emotions are unproductive and a waste of time.

—The effects of this parenting style were very similar to the effects of the dismissing parent, primarily resulting in the child experiencing difficulty being aware of and regulating emotions. Anxiety and stress due to lack of parental support, fear associated with becoming dependent on others, and a greater tendency towards substance abuse are all reported as possible effects as well.

—This parenting style contrasts sharply with the previous two in that the Laissez-Faire Parent accepts all emotional expressions from their child. They believe in riding out displays of negative emotions and that once those emotions are released, the work is done.

—The effects of this parenting style are remarkable. Their children have trouble concentrating, forming friendships, and getting along with other children because they don’t learn to regulate their emotions.

—The last kind of parent Gottman identified was the Emotion Coach. The Emotion Coach sees negative emotions as an opportunity for greater intimacy. They don’t make fun of or downplay negative emotions, nor do they suggest how their child should be feeling. Emotional moments become a time to, as the Gottman website says, “listen to the child, empathize with soothing words and affection, help the child label the emotion he or she is feeling, offer guidance on regulating emotions, set limits and teach acceptable expression of emotions, and teach problem-solving skills.”

—This style of parenting leads to children who trust their feelings, display high emotional intelligence, and get along well with others.

Albert was distressed to learn that he and Christine fell into the Laissez-Faire parenting style. Growing up, they had been chastised for their negative emotions, often told to “stop crying” and “smile more.” They had vowed to not repeat the same mistakes their parents made, and they instead let little Aaron have his outbursts and burn himself out. Little did they know, this parenting style can be just as harmful to a child’s development. In the future, they decided to use Aaron’s outbursts as a chance to bring the family closer together and identify emotions and acceptable ways to express them.

If you’re curious what style of parent/caretaker you are, the Gottman Institute has a quiz you can take here to determine your scores across the various categories.

Dantrell and Beverly Jones have 3 children of different ages. Dantrell Jr. is headed off to college at his father’s alma mater. Louisa is 2 years younger and runs track in high school. If she keeps going the way she is, she should be looking at scholarships from several major universities. And then there’s young Davie, who just turned 6 and who wants to draw comic books when he grows up. Dantrell and Beverly have never picked up a parenting book in their life. They’ve never heard of emotional intelligence or Emotion Coaching. But even without knowing the terminology or research-based theories, they’ve put into practice one of the best and most effective parenting strategies out there: role modeling.

Role modeling, as explained by the Center for Parenting Education, is the idea that as a parent, you influence your child’s development by serving as an example to emulate. This is common sense to a lot of parents, like the Joneses, but knowing how best to serve as a role model and the precariousness of that position indicates that there’s a lot more to it than just providing a good example.

Being a parental role model is a precarious position because for every potentially beneficial trait you can pass on, there are potentially detrimental behaviors you can pass on as well. Abusive or addictive behaviors are passed down just as easily as constructive or beneficial ones. Being a role model is a difficult task, but it’s a proven method for positive parenting.

The Joneses haven’t read a lot of parenting books; they just do what feels right to them. What that looks like can be many things. First and foremost, they lead by their own example. If they say, “be kind to strangers,” they display kindness to everyone around them when they’re at the grocery store with their youngsters. They smile and say hi to the neighbors, they tip their servers at Sunday brunch, they show their children what a positive outlook looks like in the real world.

Mistakes will happen, that doesn’t mean you’re a bad role model. How you handle yourself when things don’t go your way is just as important for a child. Your kids are going to mess up just as much as you have. By role modeling resilience and determination in the face of adversity, your kids will learn how to handle it with grace.

Simón and David Sousa adopted a 3-year-old, Julietta. Like the Yees, they went out and bought every parenting book they could find, even ones specifically directed towards adopted children with same-sex parents. The books discussed many of the same things I’ve already covered in this article, but one thing they didn’t cover was what to do when little Julietta tried to join them during their weekly Yoga session.

At first, they thought including her in their practice was a bit silly, but the more they thought about it, the less silly it became. Didn’t they want their child to grow up mindful? Didn’t they want to spend more time with their child? When they found themselves answering yes to all their questions, it went from a silly idea, to a family activity.

And the Sousas have the right idea. Mindfulness is on many people’s minds, even parents of children who don’t even know how to read yet. The physiological and mental benefits of meditation and mindfulness are well researched and well known. Mindfulness relieves stress, develops compassion, and cultivates empathy, but introducing it to your child can seem like a daunting task for many who struggle to even find time to incorporate into their own lives.

David and Simón found this article from the New York Times, which has so much useful information I can’t even repeat it all here. They were inspired to start monitoring themselves to not lose their calm around Julietta, performing breathing exercises during her tantrums, and using every moment as an opportunity to teach something about mindfulness, every day.

These examples are just a few of the ways that parents and caregivers raise their children to be emotionally intelligent. What works for your family may look different than what worked for the Yees, Jonses, or Sousas, but hopefully their examples have inspired you to discover how EI can be incorporated into daily life. So what does your family do? Please share your stories in the comments about successes, failures, and everything in between. I can’t wait to hear how EI has impacted your life.